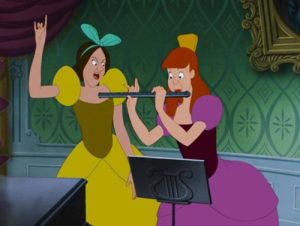 Cheryll and I have been wanting to do these costumes for a long time. Cinderella’s stepsisters are just so ridiculous and hilarious. Looking over photos from the official Disney park character actors was inspiring. They get to take the best photos!

We were going for the original movie design, so I ended up in this kind-of-awful green polyester fabric again. I swear it’s the same fabric as my Sleeping Beauty Fauna costume! It’s hard to tell how wide their skirts are supposed to be as it fluctuates a lot in the movie. We wanted something exaggerated looking and the Disney park costume has very wide skirts which we liked, so we decided to go with an 18th century robe l’anglaise silhouette.  There’s a bumpad and a quilted petticoat under the skirt. The top is a separate piece that’s boned, and the sleeves have tulle ruffled and sewn to an undersleeve to give them shape. As a final touch, we put piping along the edges of the bodice and peplum to give it a more cartoony looked.

The wig was a complete PITA to do and I’m still not happy with it, but at least the curls are finally staying. The bow, however, I love to death. It’s so ridiculous! It’s build on a headband, and there’s Peltex and wire inside to help support it because it’s so big.

We tried wearing these costumes to 3 different events and for various reasons, they never got worn. Things like a broken zipper in the parking lot while changing has me convinced this set of costumes is cursed. When I finally got around to wearing mine, Cheryll got sick so I had no Anastasia. Hopefully next time we’ll get to wear them together and take silly photos!