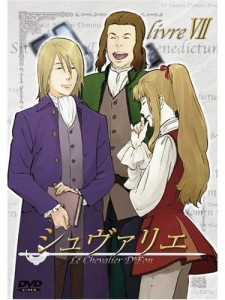 An anime with giant period dresses and zombies! Not really a surprise that HCC liked it and wanted to do cosplay from it right?

I’ll admit I wasn’t the hugest fan the first time I watched this series, but I watched it again as I was making my costume and found it much more enjoyable the second time around. I think knowing everyone’s ending actually made the series more poignant for me, and it’s cool to see a series that creates female character as strong and memorable as Lia, even though she’s dead before the story even starts.

I originally thought I’d be cosplaying d’Eon but by the end of the show, I was in love with Maximilien Robespierre so I chose to cosplay him instead. It’s a simple costume so there isn’t really a whole lot to say about it.

For anyone wondering, Maximilien Robespierre is the name of the man who eventually becomes the father of the French revolution, but the character I’m cosplaying isn’t that person.