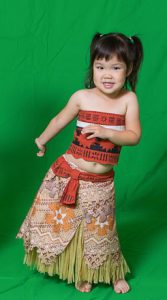 Moana was the Brood’s first Disney movie and it’s a great movie that we all really liked. The official Disney costume is really nice, so I used that as a base and modified it.  I re-made the top and belt, and put in a synthetic grass skirt that I thought would look nicer. For anyone who wants to replicate what I did, I have a tutorial on my blog.

I did get them wigs but after one trial wearing, they were having none of it, so now I have 2 unused Moana wigs.

We used these costumes for our holiday card which was shot on a green screen, hence all the photos with the kind-of-awful backdrop. =D